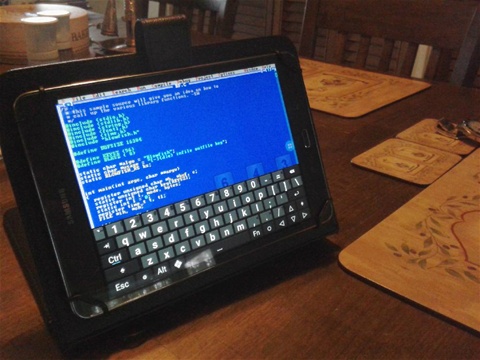 Not everyone loves APL.  So here is the Borland-C++ compiler, running under gDOSbox on an  Android Samsung Tablet, compiling the "Blowfish" encryption program.

The Blowfish algorithm is a decent encryption program, which accepts an input file, and output file, a switch (e = encrypt, d = decrypt), and a password-string.

A DOS-based version of this algorithm was released in 1992, complete with libraries and compiled example program, which was made using Borland-C++, and MS-DOS.  I found the old Borland 3.0 DOS compiler at the Winworld site ( https://winworldpc.com/product/turbo-c/3x ) and downloaded and configured the Borland IDE (Integrated Development Environment), and re-constructed the original DOS-based Blowfish program.  This code runs under gDOSbox on the Android platform, and also on the hacked iPad, running the current DOSpad (which is needed so DOSpad has access to the device file-system.)   Here are screenshots of the compile, the linkage-edit, and the resulting run of the BF.exe program, against a TEST1.TXT file of text.  The generated encrypted file "TEST1.CRY", can be decrypted, by just running BF against it again, with the "-d" flag to indicate "decrypt".  This would just be "BF -d TEST1.CRY TEST.TXT mypassword"  (Note: Don't use "mypassword" as your password.  Use something that only you know, and will not forget.  I just used "mypassword" in the example here, to show where the password goes... 😀)

The little Android and iPad tablets are complete, full computers, in their own right.  There is no reason one cannot use them to perform useful tasks. 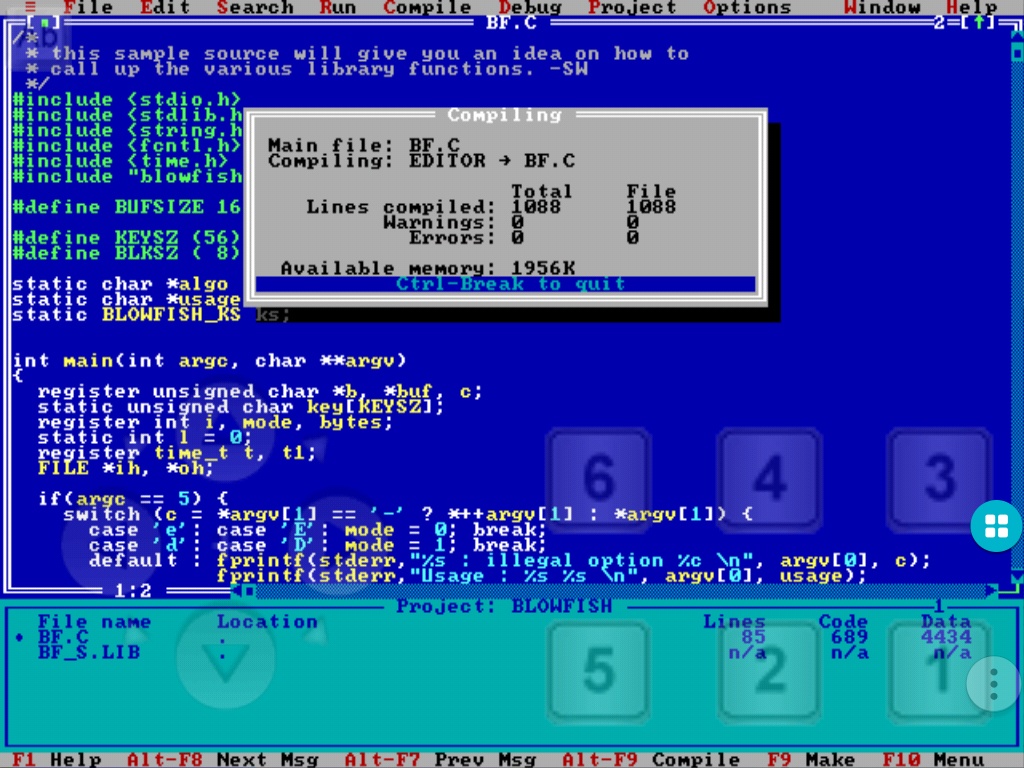 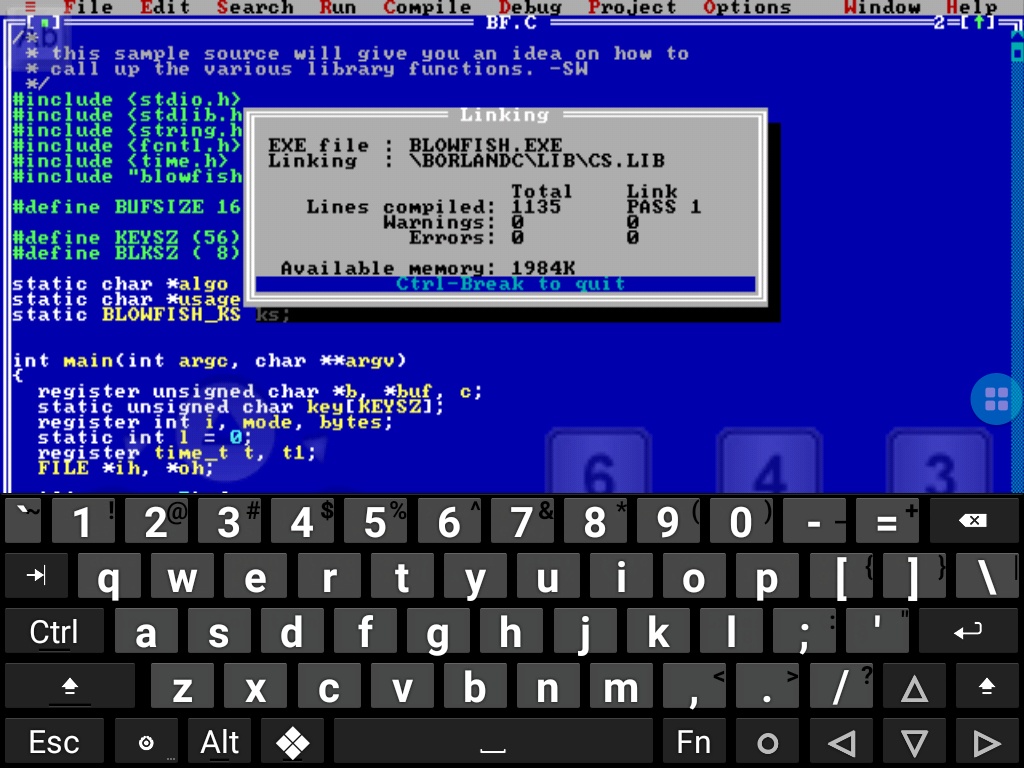 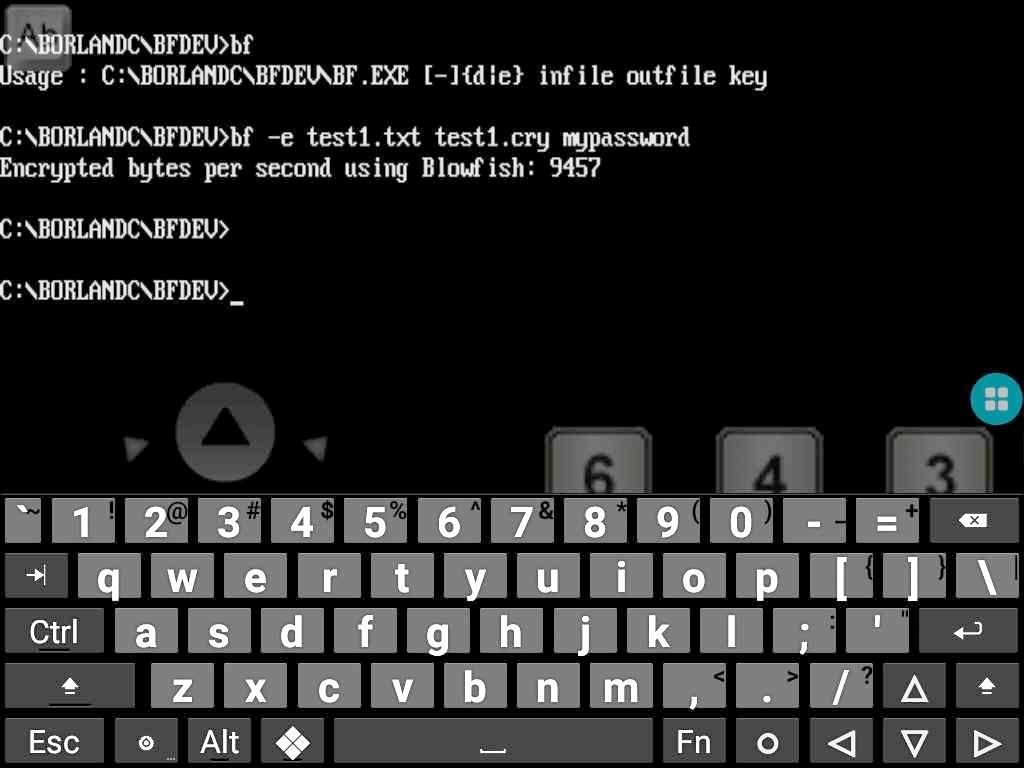 And back at gDOSbox level, you can run Blowfish, which is used to encrypt your material, and keep your information secure and private, if it has to be sent anywhere. 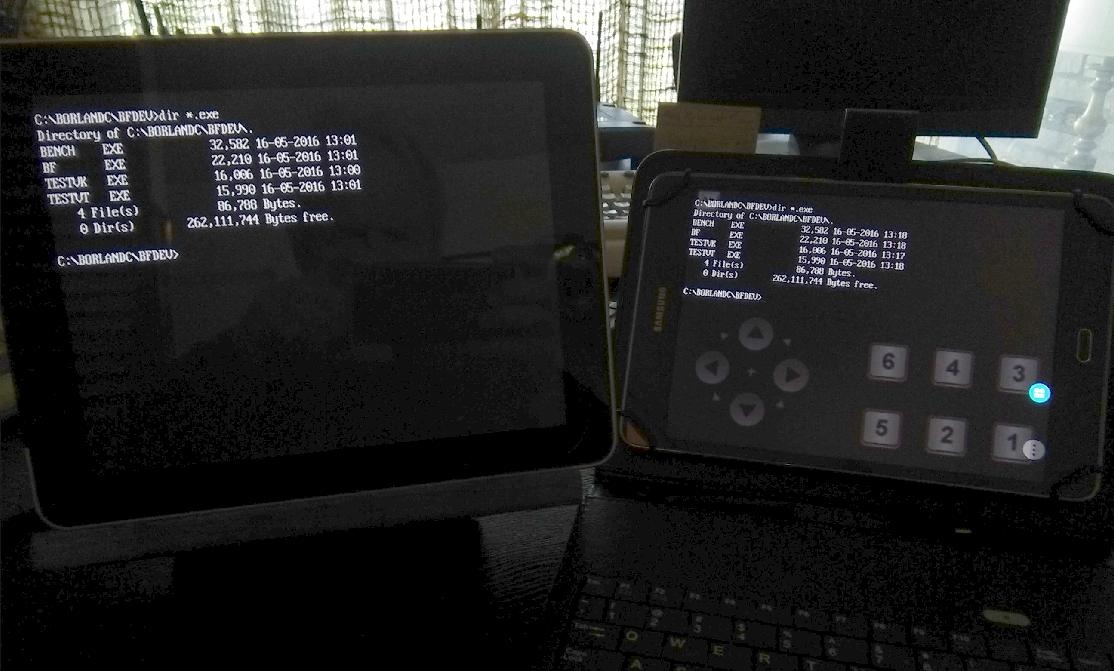 The Blowfish .EXE's compile *exactly* the same on iPad running DOSpad, as on a Samsung (Android 5.0.2) TAB-A running gDOSbox. This picture above shows the just-created four Blowfish .EXE files, built after running MAKE CLEAN and MAKE on each platform.