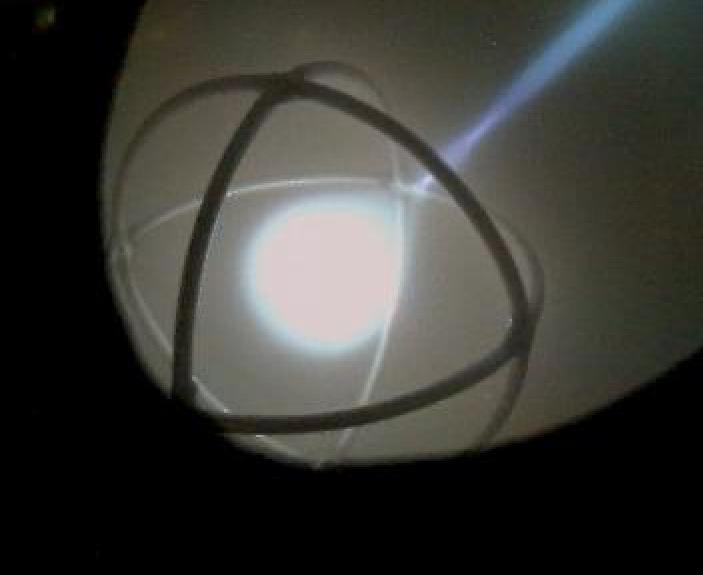 Prototype operation of a focused particle-beam device. Photo is un-retouched. This method of beam-focusing was discovered by pure accident, as I was really trying to build an intertial electrostatic confinement (IEC) type fusion device (which actually, I did.) But this result was quite unexpected, as it shows without doubt that a spherical confinement topology can in fact successfully focus an electron-beam. Exactly why and how this occurs is not clear to me, but beam etched a spot on the wall of the vacuum chamber. I always viewed this observation as just a technical "fail", but recently, some other work has led me back to thinking about this result. What if the spherical e-field confinement geometry could be used as the drive-structure in a space-craft? The beam is exiting at a reasonable portion of light-speed (maybe 0.4 of c?), so scaled up (and operating in a vacuum), this topology might actually impart some thrust, if the beam could be induced to transport some mass, perhaps via some form of inductive ablation. 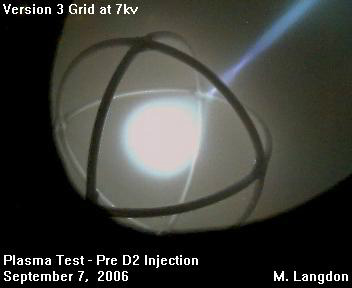 This is a real result, from an actual photo I took over 10 years ago, when I was engaged in some plasma-physics experiments.   I had this anomolous result where I got, for this particular grid topology, a single, focused and directed beam eminating from the ball of plasma in the containment grid.

It looked pretty cool, but it was just an experimental "fail" I had thought, because it looked to indicate that the vacuum level was insufficient to achieve fusion, and the beam was not seen to be anything very useful.

But it is curiously focused, despite the containment grid topology, and I've had this idea that perhaps this could form the basis for a beam-drive in a space vehicle (where yes, you have a pretty high-vacuum by default, without having to run the diffusion-pump for a couple of hours!)

The trick would be to dump enough mass of some kind into the beam, at sufficient velocity, to impart a small-degree of thrust to the platform the whole apparatus would be mounted on.

I have to think about it more, but even a little push, applied for a long time, can get one moving at an interesting and useful velocity.

Typically, in a reaction chamber where fusion is occuring, and there is a high neutron flux, one of the problems is chamber-wall ablation.  The neutrons - remember, they have no charge on them - will ablate or "sand-blast" away the steel wall of the vacuum chamber.  Closeup electron micrographs show a chamber wall that looks like swiss-cheese.

Could the ablation phenomenon be harnessed somehow to drop some heavy ions into the electron steam, and vector everything out the back at a high enough velocity to impart some push?  I have to think about it more...