How Berlin Saved the World 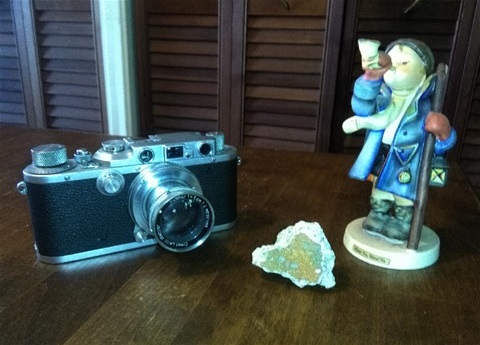 The funny bit in the centre, between the old Leica camera, and the young West-German "Town Crier", is an original piece of the Berlin Wall. A friend brought it back, after a visit to Berlin in 1990.

Berlin is an amazing city, which has risen like a Phoenix from several different Hells. It has the most powerful Angel of all hovering over it: Truth.

The city has taught the world to see the difference between what is true, and what is false. This skill is needed now, more than ever.

August 13th, 2021 was the 60th anniversary of the construction of the Berlin wall.  Construction began on August 13th, 1961.   Less than 10 years after the Berlin Wall was built, I went to Berlin, as a young boy, and saw and touched that very strange Wall.

Here is a video showing the Berlin Wall, and it's construction:

Here is my Berlin story:

I was a little kid - 14 years old - in 1970.  We flew to Frankfurt, rented a Mercedes (the owner's actually) from a small car-rental in Frankfurt, and my parents and I drove around Europe.  It was - for me - like a crazy-strange land of magic and beauty and weird-horror.  We toured Germany.   My father stood in line for several hours, to get East German permission, to drive thru East Germany to West Berlin.

For me, it was like a science-fiction movie - or a Star Trek/War-movie set.  It was bizzare.  There were all these East German guards with guns - they looked exactly like Hollywood TV-Nazi's, minus the swastika.  I was entranced - fascinated.  There was still bomb-damage in East Germany.  The farms seemed to be mostly abandoned, or not worked.  (So different from the rich, well-tended lands of West Germany, which looked exactly like my home-town area in Southern Ontario, Canada.

When we got to the entrance for West Berlin, there was this big car-park, where all the cars were checked for hidden passengers - people trying to escape East Germany.  A fierce-looking guard slid a mirror under our Merc, to see if anyone was holding on under it!  Then, he opened the trunk, seached carefully, and opened the gas-tank cap, and stuck a long wire down, to see if maybe we had a false tank, with someone maybe hiding in it.   I stood and watched - just entranced to see such a fantastic display of what shit-eating evil "Communism" truly was.  If any human on this planet remains a "communist", then they are either ignorant or just evil.  The whole of East Germany was a giant PRISON!

Later, I saw Check-point Charlie - and the museum which detailed all the various methods that East Germans had used to escape from East Berlin, to West Berlin and freedom.   I saw the maps which showed how the "Berlin Wall" had even been run underground, so the Berlin subway was blocked and walled-off.    It was so strange and curiously awful.  We walked over to barbed-wire around the Russian "monument" - guarded by real Russian soldiers, on the "17 of June Street".   Later, my parents went into the "Kempinski Hotel" on a big street called "Kurfurstendamm", which I recall had a large ruined church steeple in the centre of it.  The whole experience has stayed with me.    I honestly could not understand why people even talked with Russians or German Communists or would even think about voting "Socialist" or "Communist" in any election.

The entire East Berlin city, looked like a giant prison.   The fact that *anyone* would assist in the construction of such an obscenity as the Wall, still astonishes me.  I was 14, and I asked my older brother - who was a "socialist", how long he thought something so completely insane could be expected to last - a giant world-city, with a prison-wall right thru the middle of it.  He said "Any nation that twice tried to make war on the whole world - I am glad they are split in half like this."   This was even more strange, since we are both part German!  And then the penny dropped, and I saw - to my surprise, and with perfect clarity - my brother was an asshole.  Just a plain, selfish, standard-average asshole.    I recall the curious sense of surprise that I felt.  I decided not to argue with him, since I realized there was no point.   I think I said something like: "This cannot last.  It's stupid.   It is just stupid."

But I learned a crazy-valuable lesson.  I learned that smart people can be wrong, and stupid in their thinking.   This is a very, very good thing for a young fellow to learn.  Many smart people have shit-for-brains, when it comes to real-life thinking.  My brother was and is a very smart guy - he went on to get a PhD, and he could craft wonderful - and completely wrong - compelling arguments.  He was very good at rhetoric.   He became a member of Parliament (for a Socialist party of dishonest folks).   I did economics and computer stuff.  It worked out well.

Driving thru East Germany, as a little kid in a Mercedes back-seat was educational - but seeing the Berlin Wall - up close, and being able to walk up and touch the free, West-Berlin side of it - and yet seeing the tank-traps, the Guard-Towers with two soldiers in each one, with machine-guns, all the barbed-wire - all of it... the big sign, that would flash free-world news from the West, to the prison-folk in the East ... it was simply mind-changing in the most direct way.   Here was a big, modern city, where the clear proof of the complete Failure of Socialism was on such perfect display.  This was not just about Germany or German people.    Berlin was about ALL PEOPLE EVERYWHERE.   It was the most amazing, strange thing I have ever seen or experienced in my life.   It completely changed me - and I think it changed the whole world, too.   No rational human being could look at the Berlin Wall, and see anything positive about it.  It was a perfect crystalization of the Failure of Socialism.

But it educated us all.  It was physical proof of the economic and political madness of socialism.  It proved - clearly - that the communist model was that of a giant prison.

And by educating everyone in the West,  Berlin showed us what Communism would look like, if the disease were allowed to spread.    It gave us all, an intellectual vaccination.